Until the 18th century, painting in Turkey was mainly in the form of miniatures, usually linked to books in the form of manuscript illustrations. In the 18th century, trends shifted towards oil painting, beginning with murals. Thereafter, under European inspiration, painting courses were introduced in military schools. The first Turkish painters were therefore military people. The modernisation of Turkish painting, including representation of the human figure, started with the founding of the Academy of Arts under the direction of Osman Hamdi Bey, one of the great names in Turkish painting. In 1923, following the proclamation of the Republic, a society of contemporary painting was set-up, followed by many other such schools. Art exhibitions in Turkey’s cities multiplied, more and more people started to acquire paintings and banks and companies began investing in art.

The modernization that accelerated under the leadership of Ataturk, and with the following of the thought and art       movements in Europe in a conscious and sensitive manner, paved the way for the creation of the cul- ture and art of the new Republic. In fact, today it is observed that a “Modern Turkish Art” language has been formed which represents Turkey at an international level, in which the individual styles are prominent and in which regional motifs and subjects gain importance.

The first examples of the Ottoman miniature paintings were produced under the patronage of Fatih Sultan Mehmet (Mehmet the Conqueror ) in mid 15th century. An important feature of the Ottoman miniatures is the realistic portrayal of actual events while adhering to the traditional rules of Islamic art. Topkapi’s priceless collection encompasses not only Ottoman works but also those of many different dynasties and regions within the Islamic world, including Baghdad and Mosul in Mesopotamia (13th century); Il-Khanid Tabriz and Muzaffarid Shiraz (14th century); and Akkoyunlu Shiraz and Tabriz, Timurid Herat, and Safavid Shiraz and Tabriz (15th century). 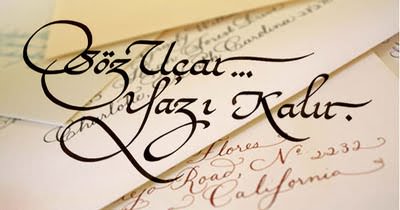 This art emerged after a long period between the 6th and 10th centuries as Arabic letters evolved.After turning to Islam and adopting the Arabic alphabet, the Turks failed to play any part in the art of calligraphy for a long time. They first began to show an interest in it after moving to Anatolia, and the Ottoman period was one of the times during which it flourished most. Şeyh Hamdullah is regarded as the father of Turkish calligraphy, and his style and influence predominated until the 17th century. It was Hafız Osman (1642-1698) who produced the art’s most aesthetically mature period. All the great calligraphers who came after basically followed in Hafız Osman’s footsteps.
As well as the six main styles of calligraphy, the Turks also created a new style from the ‘talik’ form discovered by the Persians. The early examples of this ‘talik’ style were heavily influenced by Persia, but in the 18th century mehmed Esad Yesari (died 1798) and his son Yesari Mustafa İzzet (died 1849) gave it a whole new appearance. 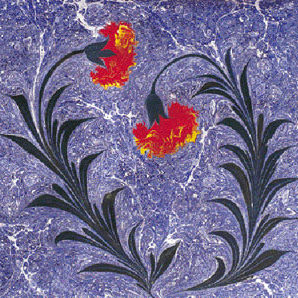 The art of marbling on paper, or ‘ebru’ in Turkish, is a traditional decorative form employing special methods. The word ‘ebru’ comes from the Persian word ‘ebr,’ meaning ‘cloud.’ The word ‘ebri’ then evolved from this, assuming the meaning ‘like a cloud’ or ‘cloudy,’ and was assimilated into Turkish in the form ‘ebru.’ Marbling does actually give the impression of clouds. Another possible derivation of the word ‘ebru’ is from the Persian ‘âb-rûy,’ meaning ‘face water.’

Although it is not known when and in which country the art of marbling was born, there is no doubt that it is a decorative art peculiar to Eastern countries. A number of Persian sources report that it first emerged in India. It was carried from India to Persia, and from there to the Ottomans. According to other sources, the art of marbling was born in the city of Bukhara in Turkistan, finding its way to the Ottomans by way of Persia. In the West, ‘ebru’ is known as ‘Turkish paper.’

Marbling, a traditional Turkish and Islamic art dating back to the 15th century, can be described briefly as water face painting.

Patterns, which take shape on water, are fixed when they are transferred to paper or other materials, which can be used for a variety of purposes.

As is akin to abstract painting and contemporary graphic art, nowadays marbling is often framed and hung. 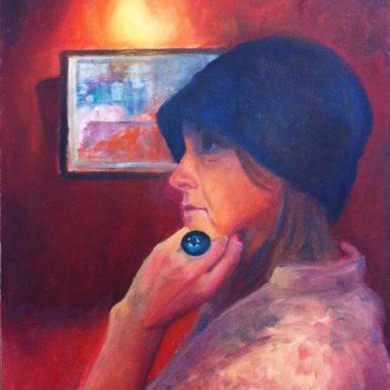 This means of expression, which dates back to the very earliest times, has also been employed by the Turks. It is known that the Turkish tribes on the steppes of Central Asia produced ‘animal style’ pictures, so called because of their subject matter. After the adoption of Islam, representational art was little used, on account of religious prohibitions, and decorative arts developed in its stead. For that reason, the concept of Turkish pictorial art tends to imply the art of painting that developed under the influence of the West and contemporary painting.

The very first painting lessons were scheduled at “Muhendishane-i Berri-i Humayun/Military School of Engineering”s were 1793 mostly for technical purposes.Artists who formed the 19th century art milieu were from military and civilian schools.

Reformist sultans supported the moves towards Westernisation in the 19th century. Mahmud II had his own portrait painted and hung on the walls of state offices. Abdülaziz personally engaged in painting. The works of the early Turkish painters, who generally had a military background, date from this time. On account of the rather frozen, amateurish feeling to their work these painters are known as the ’19th century Turkish primitives.’ They sometimes made use of photographs, and produced views of palace and mansion gardens of Istanbul. These figures include: Hüseyin Giritli, Hilmi Kasımpaşalı, Süleyman Sami, Ahmed Bedri, Salih Molla Aşki, Osman Nuri Paşa, Ahmed Şekür, Selahattin Bey, Şefik Bey, Necip Bey, Münip Bey, Ahmed Ziya Şam, İbrahim Bey, Mustafa Bey and Şevki Bey.

The most important development from the point of view of the art of painting was the establishment of the state school of art towards the end of the century. We know that a private school called the Painting Academy had been opened in Istanbul in 1874 by the artist Guillemet. Students at the school presented their works to the public at an exhibition in 1876. However, the first body to offer instruction in contemporary painting in Turkey was the Sanayi-i Nefise Mektebi, later known as the Fine Arts Academy and the present day Mimar Sinan University), which opened on March 1, 1883. Painter and museum expert Osman Hamdi Bey had been brought in to head the school the previous year, and it was written that the school would be offering courses in ‘painting, carving, architecture and engraving.’ Training in painting henceforth tended to move to such new schools away from the military academies.

Some have been educated abroad, others in the country. A Christian minority and “Levanten” artists as well as foreign painters who influenced the art milieu lived and contributed to arts in Istanbul. Some Turkish artists like Osman Hamdi Bey (1842-1910) and Seker/Sugar Ahmet Pasha(1841-1907), Suleyman Seyyid (1842-1913), Halil Pasha (1860-1939) of military background had been educated in arts abroad. Meanwhile Huseyin Zekai Pasha (1860-1919), Hoca/Hodja Ali Riza (1864-1939), Ahmet Ziya Akbulut (1869-1938) were among the other famous artists who had been educated in the country. Contemporary trends that emphasize figure start to appear gradually in Turkey with the “1914 Generation”.

Figure, composition and nudity entered the Turkish painting for the first time in the western sense with this generation. Young artists sent to Europe in 1926 came back inspired by contemporary trends such as Fauvism, Cubism and even Expressionism still very influencial in Europe, and they took a stand against the “1914 Generation” members.

From the 1950s on, a wide variety of artistic trends, movements and ideas can be seen. Artists influenced by these different trends produced various works, though none was able to establish superiority over the others. Malik Aksel came to be known for his research in the field of popular science. Turgut Zaim established his own style with his landscapes. Bedri Rahman Eyüboğlu produced works ınspıred by handcrafts. Dabri Berkel is prominent in the field of abstract art. İbrahim Balaban is a self-taught artist inspired by the poet Nazım Hikmet. Fikret Mualla, who worked in Paris, proved himself in the international arena. Neşet Günal is known for his realistic depictions of people in rural areas. Adnan Çoker turned in the direction of abstract art, and Salih Acar was heavily influenced by nature. 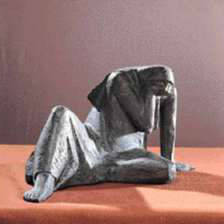 Sculpture, or carving, is the art of producing three-dimensional figures by the use of a variety of tools, and transmitting emotions or ideas by means of the aesthetic values employed. The resulting three-dimensional structure may represent concrete or abstract realities, and be representational or decorative. Sculpture has been employed since the most ancient times for the purpose of bringing an individual or event to life.

The Turks were skilled workers of stone since the very earliest times. The oldest examples of this are to be found in Central Asian art, and one thinks of the Orhun monumental statues in this context. Carved stone representations of the human bodies are also examples of early sculpture. The first body to offer training in the modern art of sculpture was the Sanayi-i Nefise Mektebi, or Fine Arts School. Oskan Yervant Efendi was one of the first Ottoman citizens and sculptures to teach there.

During the period of drawing nearer to the West in the cultural sense, that started in the final years of the Ottoman period, there was a revival in the field of sculpture as there was in the other fields of art. The activities were also continued in the Republic period to develop the art of sculpture. Series of archaeological excavations, called “National Excavations”, were made in order to unearth the sculptural heritage of former civilizations. Foreign masters in the field who were imported, instructed young talents, and successful students were sent abroad for education. In 1937, German sculptor Rudolf Belling was appointed the chairman of the Department of Sculpture at the State Academy of Fine Arts. Belling who served as a professor at the Academy until 1954 trained many students and continued to produce sculptures. He is the sculptor of the Inonu monuments at the Istanbul Taslik Park and on the campus of the Ankara University’s Faculty of Agriculture. One of the most important sculpture exhibitions in Turkey was also realized by Belling at the Taskisla building of the Istanbul Technical University.

Many of the sculptors who started their professional life in the 1950s, such as Hakki Atamulu, Yavuz Gorey, Kamil Sonad, Ilhan Koman, Huseyin Gezer and Turgut Pura, were the students of Belling. Even those sculptors whose works are mainly figurative have also experimented with figurative-abstract works. However, some of them, namely Ilhan Koman, Sadi Calik and Turgut Pura, produced mainly abstract sculptures. Among them, Ilhan Koman held many exhibitions abroad and won prizes in numerous competitions.

Hadi Bara and Zuhtu Muridoglu influenced the Academy’s Department of Sculpture after the 1950s. Sculptors such as Tamer Basoglu, Kuzgun Acar, Gurdal Duyar and Namik Denizhan are the main representatives of this school. Kuzgun Acar, who won the first prize at the Paris Youth Biennial in 1961, produced some very interesting abstract sculptures.

The artists who emerged from the school up until the declaration of the Republic included İhsan Özsoy, İsa Behzat, Mahir Tomruk and Nejat Sirel. Except for Behzat, they were all productive during the Republican period, and were also sent abroad as part of the tradition of the school that had produced them, and their services were in turn employed in teaching.Contemporary Turkish artists number such figures as: Ali Hada Bara, Zühtü Müridoğlu, Nusret Suman, Ahmet Kenan Yontuç, Hüsyin Özkan (known as Hüseyin Anka), the overseas-based İlhan Koman, Hüseyin Gezer, Mehmet Şadi Çalık, Kuzgun Acar and Saim Bugay. Women artists such as Sabiha Bengütaş, Nermin Faruki, Lerzan Bengisu and Günseli Aru have also emerged.