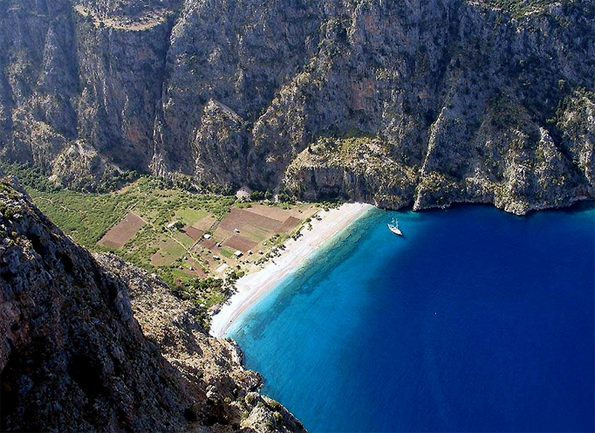 The Turkey beaches are wonderful for most of the year, but the waters begin to seriously warm up around June and stay that way pretty much through about October. This is true of the Mediterranean and Aegean beaches, but it does not hold true for the beaches on the Black Sea. These waters north of Istanbul are cooled by the Dnieper River that starts in central Russia and flows through Ukraine and Belarus. These Black Sea beaches in Turkey are wonderful if you are looking for tranquil, secluded stretches of sand and don’t necessarily have to have warm water. One of the loveliest of these is the beach at Sinop, which is an ancient city that was the eastern capital of the Byzantine Empire. Here are some very old mosques, an old castle fortress, and the ruins of a Roman temple that later became a Byzantine church. The most popular and best beaches in Turkey are found along the Aegean and Mediterranean Turquoise Coast (also known as the Turkish Riviera) that stretches for almost 1,000 miles, from approximately Cesme on the peninsula just west of Izmir to Anamur a little to the east of Alanya. The major resorts are most crowded during July and August—not a bad thing if you’re also looking for the exciting nightlife in these areas. It is still possible to find long, secluded stretches of beach.

Here are Turkey’s top 10 beaches, with nearest big town (in parentheses). Some even rate the coveted Blue Flag for cleanliness.\

Sea Turtles have been around for 95 million years. Their ancestors were giant land turtles that entered the sea ages ago when the great dinosaurs lived. The first sea turtles looked little like those of today. It took millions of years for sea turtles to change, for legs to become pad-shaped flippers and for heavy, bulky bodies to flatten into lighter, streamlined shapes. The dinosaurs and the giant land turtles are gone forever; we can see only their fossil bones in museums. But, somehow, sea turtles have lived on. Seven different kinds still swim in warm and temperate oceans around the world. They spend their whole lives in the water except for the brief times the females come onto land to nest and lay their eggs. The sea turtles share the sea with fish, whales, other sea creatures and you and me. In the seas surrounding Turkey, two species of sea turtles live: Loggerheads (Caretta caretta) and Green Turtles (Chelonia mydas).

When Chirstopher Columbus discovered the New World, there were millions of sea turtles in the Caribbean Sea. Columbus and other explorers, traders, settlers, and pirates who followed him soon found out that one kind of sea turtle had especially tasty meat. This turtle was brown all over, grew to about three feet in lenght, and often weighed some 300 pounds. It grazed in shallow beds of grass, or turtle grass, near the shore. Sailors could easily capture the gentle animal. They could turn it over onto its back so it was helpless, tie its flippers, and keep it aboard their ships to slaughter when they needed fresh meat. The fat inside this turtle’s body was green from the grass it ate, so it was named the green turtle. It is the only sea turtle that lives only on plants. Today, hundreds of years later, green turtles are still hunted and taken. Fewer and fewer remain.

The loggerhead turtle is slightly smaller than the green. A loggerhead may weigh between 300 and 400 pounds. It eats crabs and other sea animals for its food. The loggerhead hunts near coral reefs and rocks. You can recognize it by its large, thick head and broad, short neck. The loggerhead, like other sea turtles, cannot pull its head into its shell the way land turtles can. Its shell is like a suit of armor, but its head and flippers are unprotected. Certain sharks and killer whales may attack these parts, but the loggerhead is big and fast and has few natural enemies. Colour its carapace and skin reddish-brown and the plastron yellow.

The rays of the sun heat the beach, warming the turtle’s eggs buried in the sand. The eggs develop in the nest. They are ready to hatch in about two months. The patchlings pick at their shells with a small, sharp point at the front of their snout—this particular part will disappear after hatching. The hatchlings crack their shells. All must hatch at almost the same time, for all must share the work to escape from the nest. The baby turtles scrape away at the sand overhead. The sand falls upon their empty shells, forming a platform that allows the hatchlings to rise. In a few days, they have scraped their way up to the roof of the nest. Then at night, or in the early morning, little dark heads and flippers wriggle out onto the beach. Two-inch long hatchlings crawl away and look for the sea. The hatchlings sense the direction of the sea. The birghtness over the water attracts them. They stream from the nest and begin their race to the sea. Full of life, but defenseless, they struggle clumsily across the beach. Their shells are soft and offer little protection. Swift lizards attack them. Armies of crabs pick them off. Sea birds gather and catch the tiny turtles in their sharp beaks and feast on them. Few hatchlings make it to the water. And most of these will be eaten by fish: snappers, groupers, jacks, and sharp-toothed barracudas. Only one or two of the hatchlings may live. Where they go to spend their first year of life is a mystery. It is one of nature’s many secrets. Green turtles, for example, are not seen again until they are one year old when  they are found feeding offshore in turtle grass beds. They are then as big as a dinner plate.