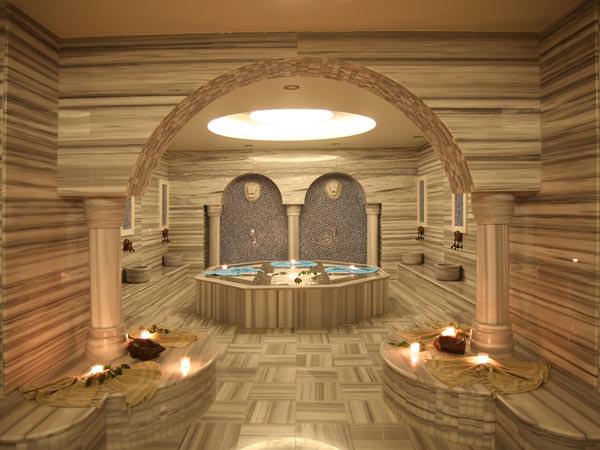 Basically a steam bath, in Turkish called Hamam is now-a-days the most relaxing way for the tourists who are on holiday in Turkey. During the Ottoman era, turkish baths were places to socialize, to bath and to get together. It was when Europeans learned about Turkish Baths. In especially Western Europe, it was Victorian era when Turkish Baths became the method of getting clean and relaxing. The word “hamam” derives from hammam in Arabic which means heat. Turkish baths during the Ottomans started as annex buildings of mosques but very quickly turned into monumental structural complexes, especially with the works of the famous Ottoman architect Sinan. Turkish Baths have separated quarters for men and women. Especially for women, turkish baths were the best places to get together before weddings, holidays and such celebrations.

One of the truly unmissable experiences of a trip to Turkey is a visit to the hamam. Like the harem, this Roman and Byzantine tradition was adopted and then perfected by the Selcuk Turks, for whom the public bath took on an important role. It was not merely a place where believers could fulfill the Islamic precept of cleanliness. It was a place in which to mingle, socialize and gossip. Women would proceed from their harem to the hamam with great ceremony, accompanied by servants heavily-laden with delicacies to tide the ladies over the hours they would spend lounging in the steam. Traditionally, a whole range of paraphernalia is associated with the hamam. The pestamal, a colourful, checked cloth which is wrapped around the waist by men is still in use. Takunyalar, or wooden clogs, often inlaid or carved, have generally been replaced by plastic flip-flops. Soap, shampoo and other toiletries were carried in hand crafted copper or even gold plated tarak kutusu, literally comb boxes, and a copper tas was used to pour water over the bather. While some of these are no longer used, they are still widely available to buy, and are guaranteed to add to the pleasure of the hamam experience. Many hamams were built during the Ottoman era, including forty by Sinan himself. Externally, they have a distinctive domed profile, with bottle glass directing beams of light inwards. The first room encountered is the camekan, a square court with a fountain surrounded by small individual changing cubicles. This leads into a small sogukluk, or cooling off section, opening into the hararet, the hot and steamy, marble clad baths. Known as the gobek tasi, or navel stone, it is positioned above the wood or coal furnaces which heat the hamam. The bather lies here for a vigorous massage or a kese, which involves the removal with a rough cloth glove of a lifetimes worth of dead skin.

Here the temparature reaches up to 60 degrees celcius and you naturally start sweating a lot and pores of your skin open while sitting or stretching your body out on the slab. Suddenly the “tellak” (bath massage attendant) shows up, and without hesitation he starts rubbing and pressing your arms, legs and joints in order to relax them. Later he continues to scrub your skin with a “kese” (scrubbing mitt) and then parts of the top layer of your skin comes off.

Many historical hamams survive, and a visit is highly recommended. In Istanbul the most popular are the historic Galatasaray Hamam in Beyoglu, and Cagaloglu Hamam in Sultanahmet, though local baths are often just as good and much cheaper. Bursa is famed for its baths and spas.